It seemed like a good idea at the time: 8 adults, 8 kids, sleeping over at a New Year’s Eve party. No babysitter required, no designated driver, no expensive taxi fares. Genius! A parents’ New Year’s night out, with no catches.

We even took the boys to a soft play in the afternoon to suitably tire them out, ready for an early night and a good long sleep (or the best we could expect with our two non-sleepers). We got our glad rags on and, Prosecco and Baby Monitors in hand, we went out (en masse) to celebrate New Year’s Eve! The first time we’d not spent New Year at home, in front of the telly, since the arrival of Big Brother in 2013.

I have to confess, I’m not a New Year fan. I adore Christmas and all the build-up to it, but New Year always feels like an anticlimax. On no other night have I ever felt compelled to sit up and wait for the clock to chime 12, before hopping into bed at the earliest (polite) opportunity. I see nothing wrong with going to bed before midnight (gasp) and raising a glass at lunchtime instead. My husband is horrified by me and dubs the 31st December “his favourite night of the year”! So, every year we have the debate on what we should or shouldn’t do and this year we were convinced we’d found a genius solution!

However, our boys, usually in bed by 6pm, became instantly wired at the sight of six other small people (aged 15m – 5 years) and none of the children were asleep before 9pm. Overtired, accident prone and a bit stroppy, they finally gave into sleep one by one, and then, oh then, we were away.

The food and drink was flowing, with easy conversation, laughter and the promise of new beginnings just a few hours away. Even I forgot for a few hours that it was well past my usual bedtime and that the scamps would usually be up in just a few hours… New Beginnings!! Perhaps this means sleep, I thought to myself… Poor, naive, 2016 me.

Midnight, came and went with raucous merriment and it was only when we finally settled ourselves and the (still) fast asleep boys on the lounge floor at 3am that the full horror of what we’d done began to sink in… and then the pressure of trying to race each other to sleep before the children woke up. Giving each other death stares into the darkness if a rogue cough or unexpected snort threatened to break the silence. Drunk sleeping is absolutely deafening. And yet the boys slept on… until around 4am – just as I’d finally dozed off.

As much as I loved last night, today is a write-off. The first day of the year, when I’m supposed to be making resolutions and casting off old ways and being the very best that I can be in my New Year New Me shaped pants, is not what I’d hoped for and certainly not what I’d envisioned when I skipped gleefully out of 2016.

We spent the evening with the dearest of friends, whose hospitality and generosity was boundless and even extended to a slap-up breakfast for 16 this morning! We couldn’t have asked for more… except, perhaps, children who sleep.

Whilst all of the other children were STILL fast asleep at almost 9am, we had already spent several hours playing quietly downstairs with ours whilst nursing very sore heads and eating leftover cheese and crackers.

2017, I’ve been awake for virtually every hour of you so far, so please forgive my false start. All four of us have struggled through today in that uncomfortable haze of overtired exhaustion which finds you staring at the clock in disbelief every time you look at it and checking that it hasn’t stopped, as time goes by SO slowly and bedtime is still hours away.

Yes, we watched a lot of Disney today. Yes, it was a pizza kind of day. Yes, we bathed the boys at 3pm and put them to bed at 5pm. Yes, all three boys (Daddy too) were out cold by 5.30pm. Yes, I kinda failed at parenting today. But tomorrow we will be better. I promise.

Happy New Year all. Sending hugs to all sleep deprived mums and dads out there – especially today. You are definitely not alone! 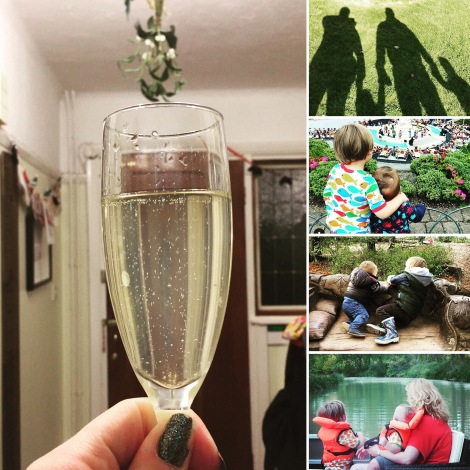